Looking for my old models, i found teh battleship Nagato, and old model i bought in 90’s years in my local store Hobbies Vicente (a friend) in Madrid.
I took the kit for repaint completed, and add details for completed.
Nagato (長門?), named for Nagato Province, was a super-dreadnought battleship built for the Imperial Japanese Navy (IJN) during the 1910s. The lead ship of her class, she carried supplies for the survivors of the Great Kantō earthquake in 1923. The ship was modernized in 1934–36 with improvements to her armor and machinery and a rebuilt superstructure in the pagoda mast style. Nagato briefly participated in the Second Sino-Japanese War in 1937 and was the flagship of Admiral Isoroku Yamamoto during the attack on Pearl Harbor.
In mid-1946, the ship was a target for nuclear weapon tests during Operation Crossroads.

The kit, is an old model form Crown, motorized. 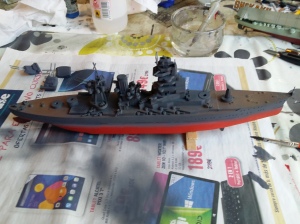 i have re-built the mástil anntena, and put the wires from palstic stripped.
The kit is painted in German grey for steels parts and Wood.
Later i have done a wash with GW ink. 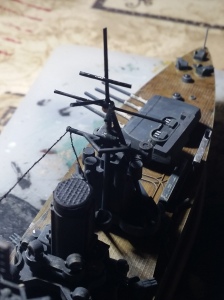 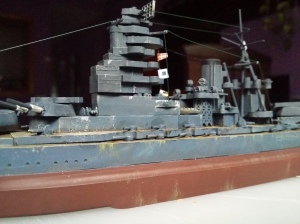 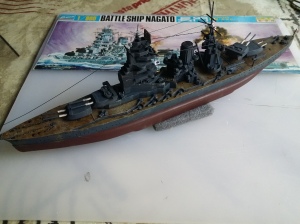 Some pictures in a lake near of Segovia 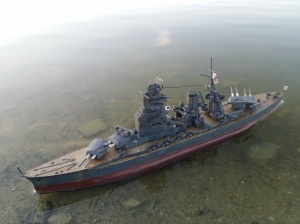 The Macchi C.200 Saetta (Italian: Arrow), was a World War II fighter aircraft built by Aeronautica Macchi in Italy, and used in various forms throughout the Regia Aeronautica (Italian Air Force).
The MC.200 had excellent maneuverability and general flying characteristics left little to be desired.
The Italian Royal Air Force (Regia Aeronautica Italiana) was the name of the air force of the Kingdom of Italy. It was established as a service independent of the Royal Italian Army from 1923 until 1946. In 1946, the monarchy was abolished and the Kingdom of Italy became the Italian Republic, whereupon the name of the air force changed to Aeronautica Militare Italiana.
During the Spanish Civil War Italian pilots fought alongside Spanish Nationalist and German Luftwaffe pilots as members of the Aviazione Legionaria (“Aviation Legion”). This deployment took place from July 1936 to March 1939 and complimented an expeditionary force of Italian ground troops titled “Corps of Volunteer Troops”.
In Spain, the Italian pilots were under direct command of the Spanish Nationalists and took part in training and joint operations with the pilots of the German “Condor Legion”. Mussolini sent to Spain 6,000 aviation personnel as well as about 720 aircraft, including 100 Savoia Marchetti SM.79 bombers and 380-400 Fiat CR.32 biplanes that dominated the air, proving superior to the Soviet Polikarpovs of Republican Air Force. The Aviazione legionaria achieved approximately 500 air victories, losing 86 aircraft in air combat and about 200 flying personnel.[

The kit 1:48 scale, is an old model from Smer i got in Casa Reyna, and represent an aircraft from Aviazione Legionaria. Really a What if, because was the Fiat G.50 Freccia.
The diorama is completed with some soldiers from SCW 28mm from Empress Miniatures and a Ford from Matchbox. Decals are form an old decal sheet form SCW .

Before paint, the kit form Smer 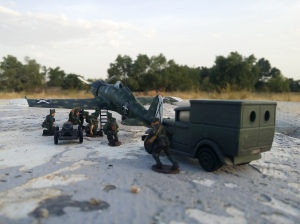