The German Wehrmacht encountered their first Shermans in Africa in October of 1942. These were vehicles delivered to the British under Lend-Lease terms.
After the Allies landed in Algeria, the first American units with Sherman tanks also came into contact with the German troops.
In August of 1944, the Captured Tank Company 281 established a platoon of five Sherman tanks (with 7.5 cm guns) that had been captured in Russia.
Among the German troops, the Sherman tank with the 7.5 cm gun was known as the “Sherman short” and the type with the 7.6 cm gun as the “Sherman long.”
On March 31, 1945, the Panzer Company “Berka” was set up, using the tanks of the Berka Test Center. It had three Jagdpanzer 38 tanks (one of them with a recoilless gun), one Panzer IV, two Panzer III, two Sherman short and one Sherman long. When the unit was established, each of the Sherman tanks carried 50 rounds of ammunition.
At the same time, the Panzer Company “Kummersdorf” was established at the Kummersdorf Test Center, using an even greater assortment of tanks. In this company, two Sherman long tanks were used by a conditionally mobile Platoon. These were probably the last units established with captured tanks.
German Captured Sherman M4 German of 11th Armored Division crosses the Muhl river.

The kit is a present from my collegue Vicente, restored with diferent part from “disaster box” and scrtach. 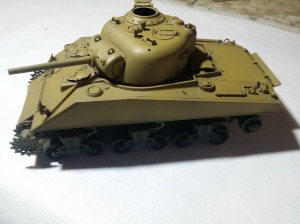 Painted first form 882 of vallejo, with lights and washes. 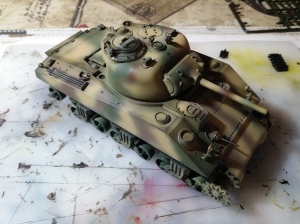 Some examples of Sherman captured: 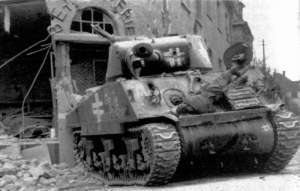 I used Vallejo pigments for simulate dust on tracks 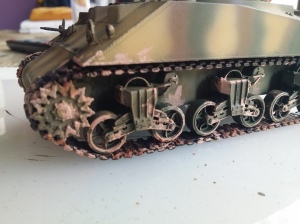 My diorama, with some soldiers from Dragon and ICM taken potos in “Montejo de la Sierra”: 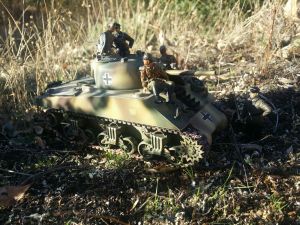 The T-62 is a Soviet main battle tank that was first introduced 1961. As a further development of the T-55 series, the T-62 retained many similar design elements of its predecessor including low profile and thick turret armor.
In contrast with previous tanks, which were armed with rifled tank guns, the T-62 was the first tank armed with a smoothbore tank gun that could fire APFSDS rounds at higher velocities. While the T-62 became the standard tank in the Soviet arsenal, it did not fully replace the T-55 in export markets due to its higher manufacturing costs and maintenance requirements compared to its predecessor. Although the T-62 was replaced in Russia and the successor states of the Soviet Union, it is still used in some countries and its design features became standardized in subsequent Soviet and Russian mass-produced tanks. 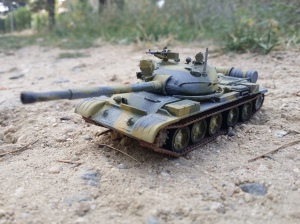